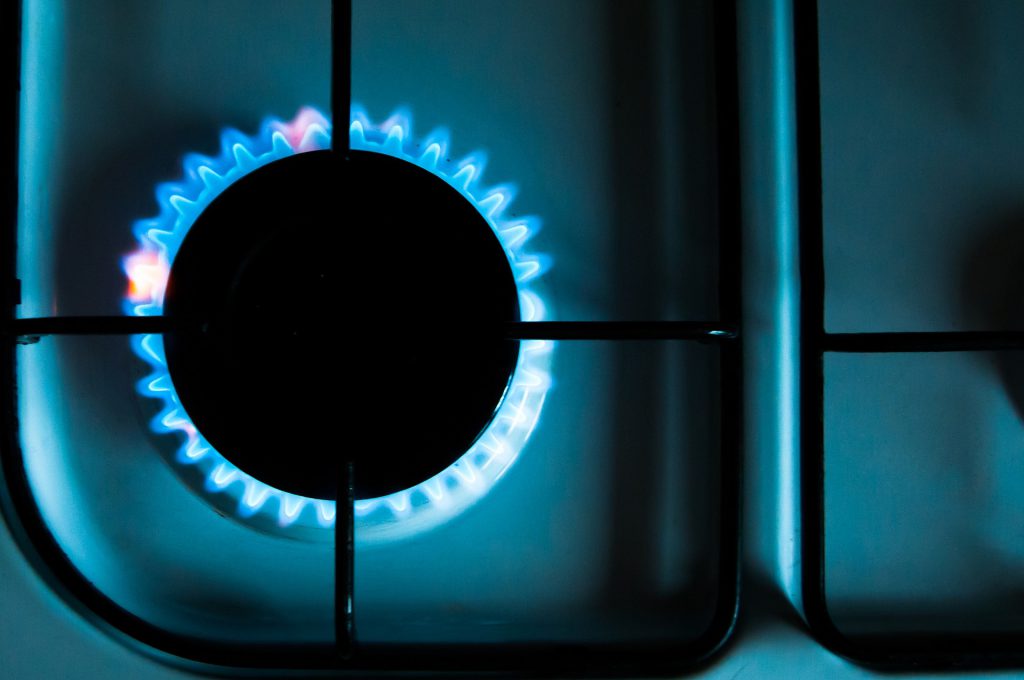 You have asked that I submit testimony by 5 PM on March 27.  I am sending what I can.  It is unfortunate the TGS has not fully complied with my information requests, so this testimony may be supplemented later when I have more information.

I propose that the monthly Residential service charge of $18.81 be drastically lowered to what CPS Energy (San Antonio) charges, which is $9.55.

I propose a second-tier be created for the top 7% of customers.  This will be 15% higher than average, with the increased revenue being used to lower rates for the other 93% of customers.

I have contended for many years that the rate structure of TGS is regressive.  The more a customer uses, the less they pay per unit of energy consumed.  This discourages energy efficiency, and adversely affects lower-income customers, who use less energy because they have less discretionary income.

I have conducted a benchmark analysis of the larger gas utilities in the U.S. as measured by the “2018 Ranking of Companies By Residential Sales Customers” from the American Gas Association.  I reviewed the top 10 utilities, which represent over 23 million Residential customers with a gross revenue of over $13 billion.

Some of these utilities operate in multiple states, and regions within states.  The tariffs usually differ.  Still, Texas Gas Service’s Central Texas service charge is on the high end.

26 out of 32 regional or state tariffs for the top 10 national gas utilities that serve Residential customers that I reviewed had a monthly service charge lower than TGS-Austin.  Some were only lower by a small amount, but 7 were less than half the TGS-Austin charge.

Another benchmark is comparing TGS to itself.  TGS-Austin is even higher than the company’s other Texas regions.  The monthly charges of the 5 other TGS-Texas regions range from $12.42 to $18.69.

Still another benchmark is comparing the gas company to Austin’s electric, water, and wastewater utilities, which charge a substantially smaller customer charge in relation to their base revenue requirements.  If TGS-Austin emulated Austin Energy for example, it would only charge a $3.14 monthly fee.

TGS is almost twice as high as CPS Energy, which charges a monthly service charge of $9.55.  Given its similarity in climate, this seems a good benchmark for Austin to follow.

Substantially lowering the monthly fee will substantially flatten the regressive rate structure that is in place.  Revenue from this reduction can be made up by a weather-normalized volume-fee increase.

Some may be curious as to how such a rate affects low-income customers.  During discovery, I requested that TGS send consumption information by zip code.  I took this information and correlated it with 2017 ACS Census (1-Year) estimates of Median Household Income.  Below are the results.  The highest quartile of income uses substantially more (68%) than the lowest quartile. 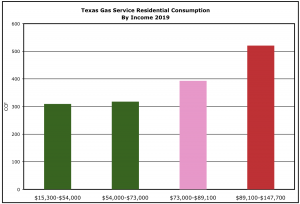 Information provided by TGS during this rate case shows the number of customers consuming various volumes of fuel.  There were only 7% of customers that consumed over 587 ccf.  This was 64% above average.  However, these 7% of customers used 15% of total volume.

Austin Energy and Austin Water have steeply tiered progressive rates, where the more customers use, the more they pay per unit.  Even though several Austin City Council Members stated publicly that they were interested in a progressive rate structure for TGS in November of 2018, the gas company has ignored the issue.

Some people have suggested that tiered rates be studied further before they are implemented.  However, since it may be 5 years until the next rate case, I propose a 15% increase on these higher-volume customers, which would be used to lower the bills for the balance of TGS customers.  A more sophisticated tier system can be proposed in the next rate case.

I propose that TGS-Austin implement a surcharge sufficient to establish a low-income assistance program that, combined with gas company contributions, would raise $500,000 revenue.  TGS should match revenue with the funding that comes from ratepayers.  This money should be given to income-qualified customers.

In FY 2019, Austin Energy spent $9.6 million on customer assistance; Austin Water spent about $5.4 million, and the Austin drainage utility spend about $600,000.  Yet last year, the gas company spent only $78,000, and half of this was from charitable contributions of individuals.

Putting a surcharge on the bill of all gas sales to create a $500,000 year program (in addition to charitable contributions) will increase the average residential bill by no more than 1/6 of 1%.

I propose that TGS-Austin implement a surcharge sufficient to establish a fund for research of fuel, hydrocarbons, and process heat derived from renewable energy that can substitute for natural gas.

TGS has no plan at all to adopt renewable energy, and few if any currently economic technologies to do so.  A surcharge on all gas sales (similar to the one proposed for Customer Assistance Program for TGS-Austin described above) could collect $300,000 of renewable energy research at credible laboratories will set a precedent for the country.

Decisions on spending would be directed by the City of Austin, quite possibly its Climate Program, with input from TGS if the company desires it.

Though this surcharge should occur with or without gas company matching contributions, it would be in the company’s self interest to ensure its long-term future.