The 2017 Austin Environmental Directory is now available. It is meant as a user-friendly guide to readers for learning about environmental issues, for identifying and purchasing environmental products, and for becoming involved in environmental organizations. The print version is distributed free to the Austin area. The Directory is also on the Internet atwww. environmentaldirectory.info/.

Our Guest on Shades of Green was the editor Paul Robbins, a long-time environmental advocate in Austin, Texas since 1977.

A different type of surplus lies at the heart of The Austin Environ­ment­al Directory 2017-18, Paul Robbins‘ massive, sprawling labor of love, released last week in its ninth edition since 1995. Robbins has won multiple Chronicle “Best of Austin” Awards – both readers’ and critics’ – for his environmental and consumer activism over the years, and in this edition he lays out an extended, somewhat fragmented article “on how to create an electric grid based completely on clean energy.”

Calling for “strategy, not stridency” in the long-term shift to a truly renewable energy grid, Robbins warns against quick-fix solutions and “impractical dreams,” and centers much of his argument around the challenges posed by the intermittent nature of renewable energy (especially solar and wind), and hence the currently enormous cost of storing and transmitting that theoretically abundant energy. In the end, he sees some positive routes toward the goal, primarily in efficiencies among consumers and utilities, and in new technologies creating a smarter grid and more ways to store and dispatch energy.

There’s also a deep analysis of Austin Energy‘s proposed new gas plant, plus of course, a ton of useful local directory info and tips on food, water, energy, green building, watershed protection, networking, and so much more. The Directory is available at Half Price Books, Central Market North, Wheats­ville, and online at www.environmentaldirectory.info. 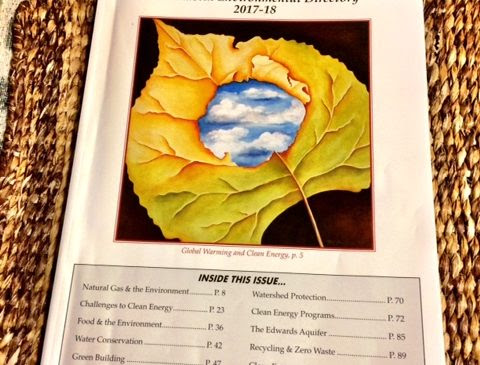 The Austin Environmental Directory 2017-18 is on its way to 15,000 Austin households. This is the ninth iteration of the directory, which serves as a primer on a wide range of topics, including watershed protection, challenges to clean energy, natural gas and the environment, and the Austin Community Climate Plan. And it’s free to the public.

The book’s editor, Austin environmentalist and researcher Paul Robbins, has dedicated the last three years to working on a wide range of topics explored in the directory. In addition, he engaged a number of other experts and environmentalists to write about food and the environment, clean energy, green building and recycling. Numerous businesses, agencies and nonprofits have supported the publication through advertising.

The introduction to the book explains that the Austin Environmental Directory “is meant as a user-friendly guide to readers for learning about environmental issues, for identifying and purchasing environmental products, and for becoming involved in environmental organizations.”

Everyone who’s serious about protecting our environment should own a (free) downloadable or print copy of The Austin Environmental Directory. Call us biased, but the 2013 edition is one of the best directories that activist Paul Robbins has published since starting this exhaustive endeavor in 1995. Appropriately, water is the theme of this year’s guide, which also includes updated info on clean energy programs, energy-efficient lighting, recycling, an expanded list of local enviro groups, and so much more. Think you know everything already? You’re guaranteed to learn something new.

Spend a few hours watching local government and chances are you’ll see Paul Robbins. The self-described “environmental activist and consumer advocate,” clad in large glasses and an ever-present tweed sports coat, is a perennial presence at meetings, offering alternately droll, combative, and informed takes on topics from energy purchases to water conservation. He’s also publisher of the periodic Austin Environmental Directory, a comprehensive assemblage of green issues from the hyperlocal to worldwide.

This edition, the seventh since the inaugural issue in 1995, took three years to complete and is available for free mainly at the personal expense of founder and Editor Paul Robbins.

In the current edition, Robbins tackles synthetic fuels, electric cars, and the “zero-energy suburb,” all topics that he says people need to understand more closely. “Humans aren’t descended from apes, but lemmings,” says Robbins. “What are they going to do when they run out of oil? They are going to do all these things that no one expects them to do. And one of them is synthetic fuel.” Most “synfuels,” as Robbins calls them in his “Synfuels and Redemption,” produce higher carbon dioxide emissions – up to 172% higher – than conventional petroleum, and they’re becoming more popular. “One of the things that I figured out was that 10% of our liquid fuel is now coming from synfuels,” says Robbins. “That’s a huge amount, and nobody I knew had figured it out yet.”

…”Many people who become activists start with something small like putting in a sidewalk,” he says. “I wanted to stop a nuclear plant.” He was one of the first in Austin to promote the idea that money could be better spent on energy conservation than on power plants, a philosophy now institutionalized at Austin Energy. “Austin began doing energy conservation in 1982,” he says, “and one of the things in my life I’m proud of is that I helped start that program with 20 other people.”

AUSTIN (KXAN) – Want to be more eco-friendly in your life, your home, your car? The new “Bible” on all things green is now available in Austin.

Environmental godfather Paul Robbins worked three and a half years to compile his Austin Environmental Directory . It is loaded with the latest information on new programs, projects and products to go green.

Robbins, a tireless environmental activist, says, “What I’m thinking is in 5 to 10 years for people to have zero energy homes and cars, that is they use no fossil fuel.”

Booklet packs zeal for cause

In Paul Robbins‘ telling of evolution, we are descended not from chimpanzees but lemmings.

“Humans may be descended from lemmings, but they are clever lemmings,” he said at City Hall. “They should be reducing their population, reducing fossil fuel use and switching to clean energy. But, instead, they try to find new ways to use the same dangerous fuel sources.”

Declaring that the federal government has forsaken its obligation to protect the environment, Robbins said, Austin should lead the way in investing in renewable fuels, such as wind energy, constructing greener buildings, building streetcar systems, mandating heat-reflecting roofs, embarking on a massive tree planting effort, converting the private gas utility to a public entity and powering the city only on green, or renewable, power.