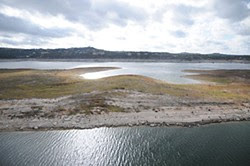 At a small ceremony amid the tall pines of East Texas, a handful of Austin officials watched one of the most unpopular investments in Austin Energy’s history rumble to life Wednesday.

A power plant fueled by wood waste held its official opening after briefly coming online a few weeks ago. The privately owned plant will sell $2 billion worth of electricity to Austin Energy for the next 20 years at a price well above the going rate for competing power sources.

“As a green-power advocate, I think we would have been better off investing in other things,” environmental activist Paul Robbins said.

Today Austin will become the nation’s first major green-energy-only municipal operation, a milestone it will reach by relying on renewable energy the city has been unable to sell to its 400,000 other electric customers.

…every penny the city would normally spend on nonrenewable sources will instead go to a West Texas wind farm. This will reduce the carbon footprint of one of Central Texas’ biggest carbon-producing enterprises.

“Austin calls itself a green city. A lot of that is hype,” said environmental activist Paul Robbins, who has been pushing the city to switch to renewable energy for more than a decade. Now that it has, he said, “This is the first time in a long time Austin is truly a leader.”

A handful of prominent Austinites are again among the city’s thirstiest residential water users, including some who previously blamed broken pipes and other aberrations for using far more water than the typical Austin Water Utility customer.

With Central Texas more than a year into one of the worst droughts in recorded history, the households of health care magnate Robert Girling, auto dealer Doug Maund, lobbyist Neal “Buddy” Jones, U.S. Rep. Michael McCaul and champion cyclist Lance Armstrong used between 13 and 20 times what the average Austin home used over the past year, according to Austin Water Utility records.

The list, obtained through an open records request by environmental activist Paul Robbins and verified by the American-Statesman with the water utility, shows water consumption from Oct. 1, 2010, to Sept. 30, 2011. That time frame roughly corresponds to the current drought, which has left Lake Travis, Austin’s primary source of water, about 37 percent full and dropping.

Then There’s This: No Drought Here

So what if the lakes are half full – it rained, didn’t it?

A little over two months ago, during a City Council work session on Austin Water Utility’s budget outlook, Mayor Lee Leffingwell raised the issue of relaxing the city’s Stage 2 drought restrictions that limit outdoor watering to once a week…

It’s possible the city wouldn’t be in a position to free up more water for St. Augustine grass had the LCRA not cut off water to rice farmers in downstream counties due to drought conditions in cities. Rice farmers are enormous water hogs, but they reportedly contribute nearly $400 million to the Texas economy and provide 5% of the nation’s rice. City officials and others often speak ill of rice farmers for using so much water without much thought to conservation.

Environmental activist Paul Robbins takes a different view. “I personally look at this situation and think, ‘Do they want us to eat grass?’ The rice farmers’ loss from this year’s crop would literally feed a million people on a calorie basis,” he said. “It seems OK to AWU that we waste water on grass, but not on rice.”

To our inquiry, Shea said by email that she drew upon a report posted online in February 2012 by an Austin environmental activist and consumer advocate, Paul Robbins, who edits the Austin Environmental Directory.

Who are Austin’s top water users?

Some were on the list last time it was published

No. 3 in 2010, Robert W. Girling takes the top spot this year, consuming nearly two million gallons of water. The Girling maid said the family had no comment about it, when asked.

Another repeat customer on the list is Congressman Michael McCaul. He comes in sixth, using 1.4 million gallons. His office said they are looking into underground irregularities because a number of top users live in close proximity. When McCaul came in the top 10 users last year, his office blamed an underground leak.

NOTE: This story was based on a public information release made by Paul Robbins.

For the third year in a row, US Congressman Michael McCaul (R-TX) and his wife Linda have returned to a list of the Austin Water Utility’s top water users. McCaul, who told the Statesman‘s Asher Price in 2009 (when he ranked seventh) that his household’s presence on that year’s list was thanks to a water leak, and then had a spokesperson repeat the same statement to KXAN in 2010 (when he ranked ninth).

Utility spokesperson Jason Hill told In Fact Daily Thursday that the McCauls reported that a contractor had struck one of their water lines in March 2011. The couple was ranked sixth on the FY2011 big user list.

A spokesperson for the Congressman suggested that an infrastructure problem may yet be to blame. Mike Rosen told In Fact Daily that several of the houses that appear high on the list are in the same neighborhood. “It seems highly irregular…the McCauls think it may be more than just a coincidence,” he said.

Though some of the addresses on the list are blacked out, at least two of the homes—that of the McCauls and one belonging to auto dealer Steve Late and his wife Ava – are on the same street.

In all, four of the top 10 residential water users from FY2010 are featured on a list of the top 50 of the Austin Water Utility’s residential customers in FY2011. Other recognizable names include former Longhorn and NFL running back Cedric Benson, onetime health industry executive Robert Girling, and auto dealer Doug Maund. Benson, Girling, and Maund were also each on the 2009 list.

In Fact Daily obtained the 2011 list from long-time Austin environmental watchdog Paul Robbins. Robbins got the list via an Open Records request.

Robbins has been a driving force behind many of the city’s environmental initiatives for more than 30 years. The Austin Chronicle Readers Poll named him Austin’s best environmentalist for 2011.

The average Austin Water residential customer uses roughly 100,000 gallons a year. Robbins noted that the households on the 2011 list used 10 to 20 times that amount. “There has been a proposal for mandatory water audits for large customers for almost five years. The Water Conservation Division has not pursued it,” he said via email. “My own opinion is that in drought, there should be some mandatory cap on consumption.”

Hill was unable to verify whether the utility was considering such an effort.

Assistant City Manager Rudy Garza was asked whether the utility has an audit program in the works for large water users.

“There is not,” he said. “The only thing that we are working right now is continuing to explore the options for a commercial audit. I am not aware of a program where we would audit large residential water users. Outside of the current one day a week watering and the other restrictions that we have, (conservation is) strictly voluntary…but we would be willing to offer them any assistance that we can.”

Maund and representatives for Armstrong and Benson did not respond to requests for comment.

The FY2011 list features 50 names. Girling, who paid for 1.9 million gallons of water tops it. Following him on the list are Maund, then Neil (Buddy) Jones, Paul Zito, Ava Late, the McCauls, Christopher Carrier, Armstrong, Molly O’Connor-Kemp, and Shannon Ratliff.

Hill told In Fact Daily that four of the top 50 households on the list had received adjustments to their 2011 bills because of leak reports. However, none of the top 10 from 2011, including the McCauls, got similar adjustments.

The majority of the top 50 water users for FY2011 reside in either West Austin or the West Lake Hills region. The McCauls reportedly used 1.4 million gallons, and Benson was billed for 1.275 million gallons.

Information for Armstrong and Maund’s usage was blacked out by Austin Water officials. The utility offers residents a choice about whether to share usage data and their address.

“2011 was the hottest, driest summer in Austin’s recorded history,” added Robbins. “These top water users are usually the wealthiest people and can afford conservation equipment. They should be setting an example for the city.”

Austin Water’s FY2011 top user list features a variety of other information, including glances at the top large volume, commercial, and multi-family residential users. As might be expected, Samsung’s Austin operation led the entire pack with over 1.2 billion gallons of water use. That figure represents the largest single point of waterconsumption from the city’s water system by a long shot.

My comments on Infact story: Rudy Garza’s statements in this story are incorrect.  On May 3, 2007, the City Council authorized two programs for mandatory audits of irrigation systems for large residential and commercial customers.  There is a document confirming this on the City Council Web site, and there is ample documentation that these programs have been delayed between the 2007 authorization and the date this story was published.

Spend a few hours watching local government and chances are you’ll see Paul Robbins. The self-described “environmental activist and consumer advocate,” clad in large glasses and an ever-present tweed sports coat, is a perennial presence at meetings, offering alternately droll, combative, and informed takes on topics from energy purchases to water conservation. He’s also publisher of the periodic Austin Environmental Directory, a comprehensive assemblage of green issues from the hyperlocal to worldwide.