As all of Travis County suffers under Stage 2 drought and Austin has implemented a burn ban in its city limits, data for the Austin Water Utility’s top consumers in 2018 is now available. The numbers show that, despite the region’s scorching summers and frequent drought cycles, a culture of water waste among certain Residential customers continues unabated. 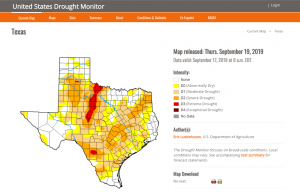 Paul Robbins, an environmental activist and consumer advocate in Central Texas who requested and analyzed the data, observed that “High water bills are nature’s way of telling you that you have too much money. This is a profile of the people who waste water, in large part, because they can afford to.”

“Lost here is the concept of ‘noblesse oblige,’ that the privileged have a responsibility to lead by example and show others how to manage things like natural resources.”

This analysis did not directly interview the customers, but Internet searches have preliminarily identified the professions or activities of 28 out of these 47 Residential customers. They include doctors, lawyers, financiers, business people in electronics hardware and software, developers, philanthropists, and even a well-known martial arts actor. At least 2 are or were heavily involved in state politics. One of these customers is identified as among the largest landowners in the entire U.S.

Below is a list of the top Residential water consumers in Austin in 2018 and their consumption in gallons as provided by the Austin Water Utility. 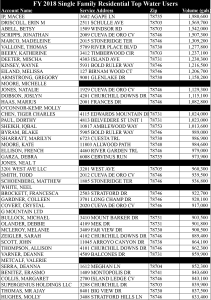 One customer not on the 2018 list was Congressman Michael McCaul. Last year he made national news for being the top Residential water consumer on the City of Austin system in 2017. Information showed that his 14,400 square-foot mansion consumed at least a million gallons a year. He has often been in the top 50 Austin water consumers since 2009.

“This was probably not the kind of front-page publicity for leadership that the Congressman had in mind,” said Robbins. “For whatever reason though, he is not on this list of top water wasters this year, and I congratulate him. I hope some of these other top water consumers follow his example.”

Another interesting observation is Austin’s largest single water user, Samsung. In 2018, it used 4.6 billion gallons, 11% of Austin’s retail water sales, enough to provide for 68,000 average Austin homes. Samsung’s 2018 use was a 112% increase from only a year earlier.

In almost all cases, the names could be matched with data from the Travis County Appraisal District and Internet searches to determine their residences or probable residences. The majority on this list could also be identified for their likely professions and community activities. However, none of these customers were interviewed for this analysis.

Originally, the top 50 customers were requested.  However, errors in the original data were adjusted, and this reduced this number to 47.