In the spring of 2022, Austin Energy began a proceeding to raise rates.  Among other things, the utility intends to raise most Residential bills by jaw dropping amounts: 18 to 84%, depending on the consumption level.

Below is testimony that presented in the proceedings against these bill increases.

Austin Energy has proposed a new Residential rate structure.  By the utility’s point of view, it is required to maintain fiscal integrity.  By critics’ standards, including this intervener, it is draconian to the point of cruelty.  The only shared opinion between these polarities is that it is radically different from the current one.

In an effort to make the rate more acceptable, Austin Energy has made the claim that its new rate actually helps low-income customers.  On p. 23 of “Austin Energy Residential Base Rates 2022 Review Process,” presented in April and May of this year to various stakeholders in the Community, AE included a chart (Exhibit 1) that was intended to display that ratepayers enrolled in the Customer Assistance Program low-income discount program have slightly more consumption than average AE customers. 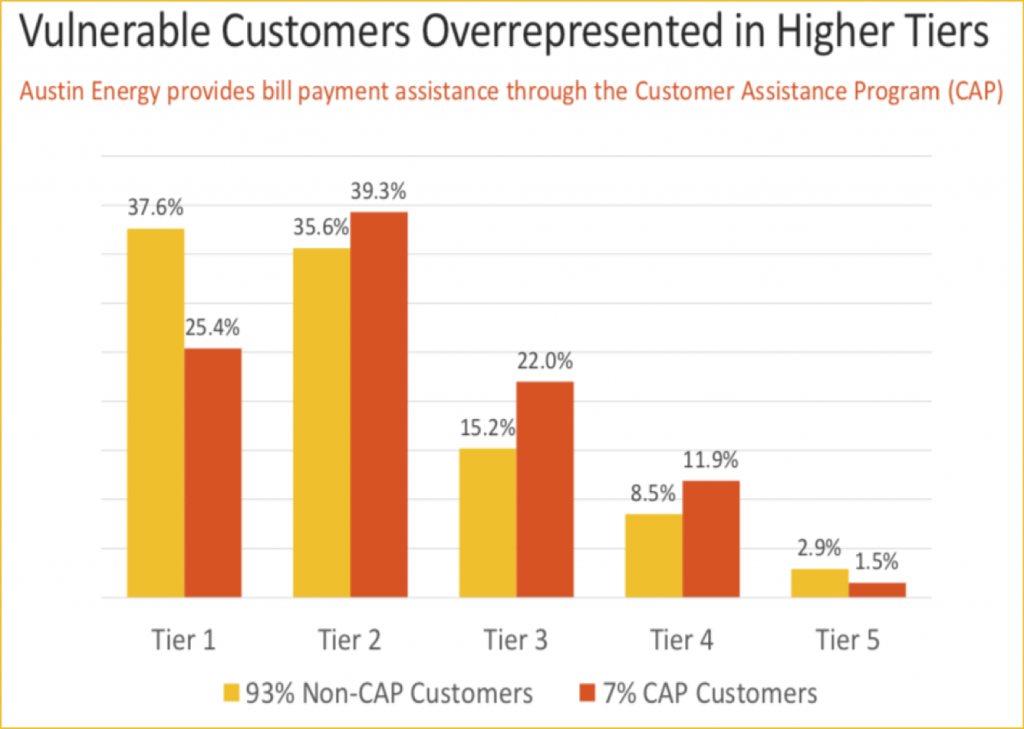 When I questioned Mark Dombrowski, Chief Financial & Administrative Officer of the utility during the June 13 rate hearing, he stated that CAP was used as a proxy for all poor ratepayers in Austin.

However, CAP only represents about 7% of AE Residential customers (7% is documented in Exhibit 1).  Households at 200% of the poverty level, the target for CAP participants, represent about 28% of households in the City of Austin (Exhibit 2).

More contradictory is that during discovery, Austin Energy provided me with data that quantifies how much average electricity is consumed per zip code by house type (single family, multiunit housing, and apartments) for all Residential customers in 2020.  (Exhibit 3 and Exhibit 3 Worksheet.). Matching this consumption to income data in the American Community Survey of the U.S. Census proves an entirely different outcome: consumption tracks income (Exhibit 4). 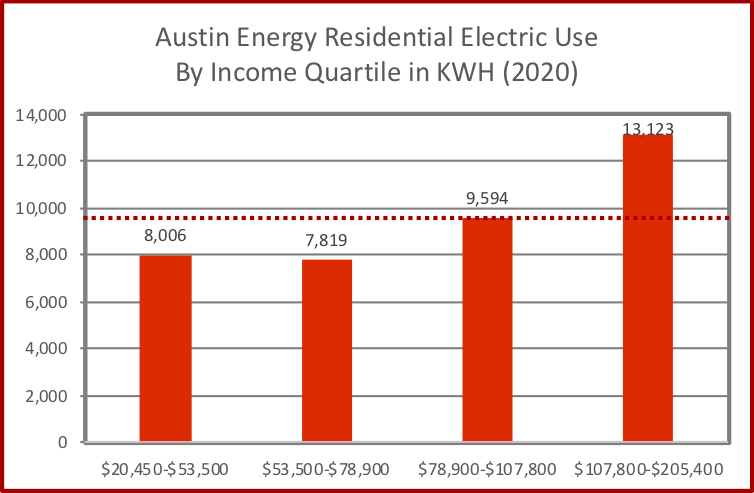 When I asked Mark Dombrowski why this data was not used instead of the more limited CAP data during rebuttal, he replied that the zip code data was not granular enough since it did not include housing type.

When I informed him that this was erroneous during questioning on June 13, and again asked why the larger dataset of consumption was not used, he had no cogent response.

When I asked him during Rebuttal Discovery what effect this radical restructuring of rates would have on low-income people, he referred me to Table 8-B, p. 133, and 8-D, page 135 in the Base Rate Filing Package showing a range of very small increases to actual bill savings for customers enrolled in the Customer Assistance Program (Exhibit 5).  But he failed to note that the reductions were almost entirely due to increased discounts in the CAP program.

Due to a history of problems in the CAP automatic enrollment procedure, some of the people who are enrolled in CAP are not poor.  Between 2014 and 2020, I have repeatedly proven that some wealthy customers are being enrolled in a program meant to serve customers at or below 200% of the poverty level.

I would have gathered evidence specific to this rate case.   However, the City of Austin supported a state law that passed in 2021 restricting the flow of information that was formerly provided to me, so it is currently not possible to search out further waste.

Suffice to say that if large, more expensive homes and homes with wealthier customers are averaged into the CAP roles, consumption will be higher, and Austin Energy figures showing CAP enrollees as consuming more energy will not be completely reflective of low-income consumption.  Mark Dombrowski admitted this during Direct on July 13, 2022.

Austin Energy, to my knowledge, has never done its own publicly-available study of potentially undeserving customers, instead responding (usually defensively) my criticism.

Below is a photo of the home owned by a customer receiving the CAP discount in 2020 at another property that they own.  Note the tennis court in the bottom left corner. 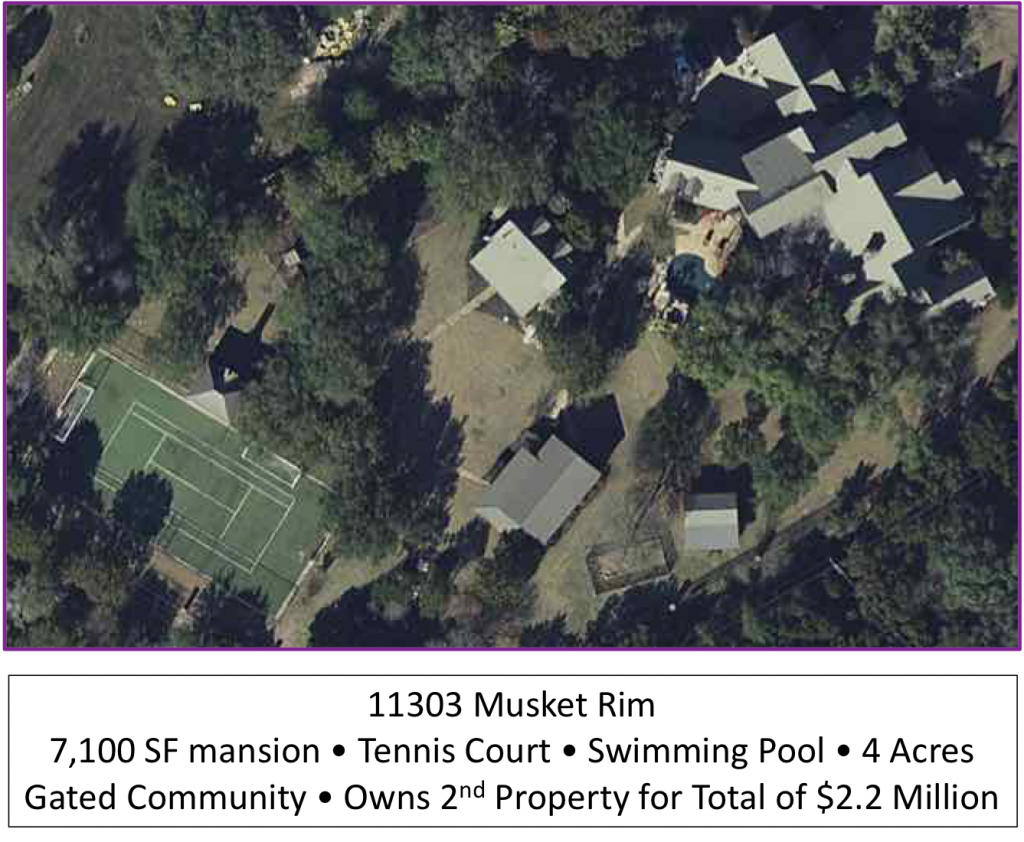 Enrolling large and expensive homes in CAP distorts the argument that CAP participants have higher consumption than average customers.

The name of the owner of this home came from a Public Information Request made to the City of Austin in 2020.  Austin Energy refused to provide an updated version for this rate case, hence my Special Motion to Compel from July 11, 2022.

On Table 10-A, p. 152, of AE’s Rate Base Filing Package (Exhibit 6), the utility showed a (supposed) peer group of utilities which have high customer charges similar to the one it proposes.  This is an attempt to normalize its draconian position on rates. 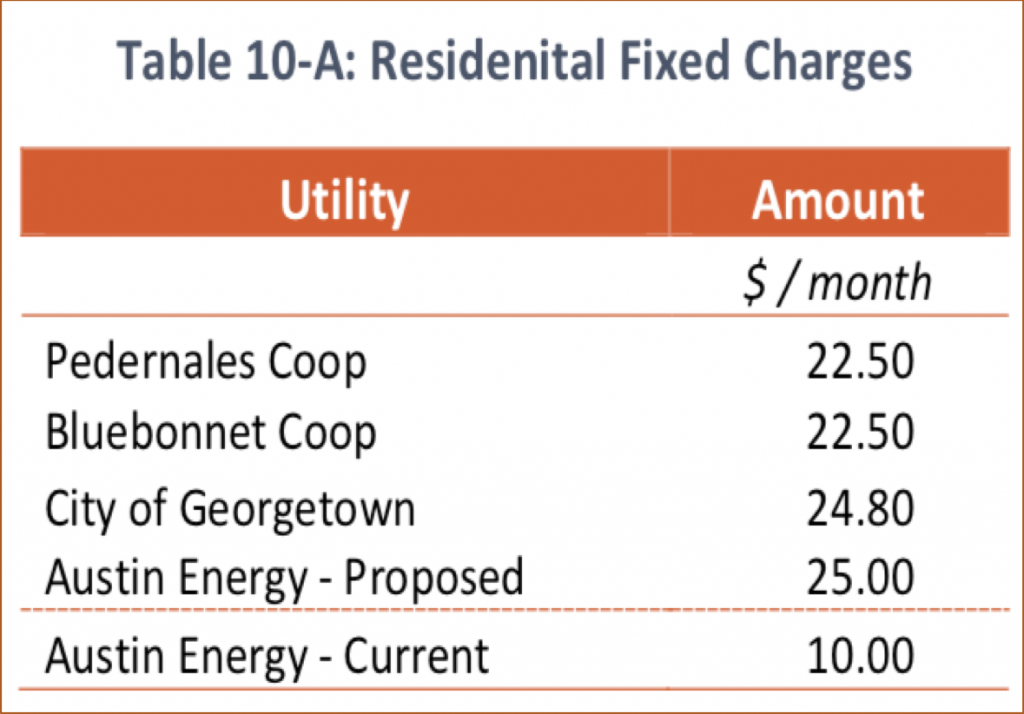 However, Austin Energy’s real peer group is Texas municipal utilities.  While the City of Georgetown meets this criteria, note that Georgetown has not generated its own electricity since W.W.II. 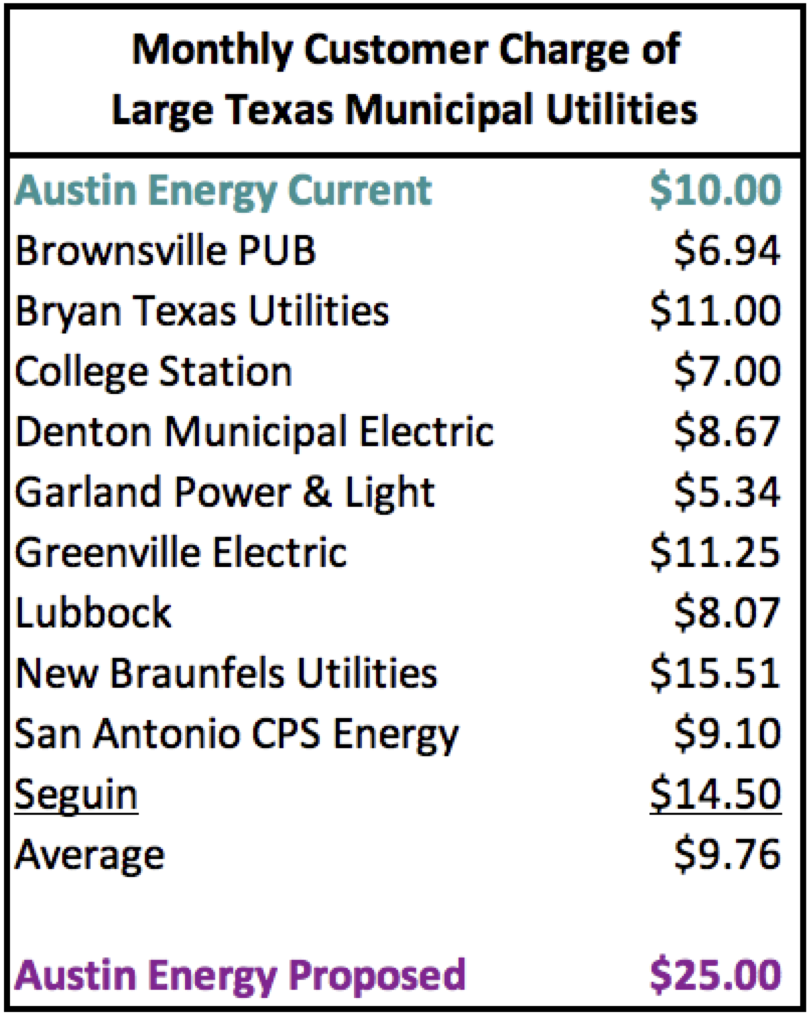 To my knowledge, none of these utilities are facing bankruptcy or credit downgrades because they have lower monthly charges than Austin’s proposed rates.

The utility proposes a $6.1 million, 73% increase in the overall program discount given to them.  This will increase pass-through costs of the Community Benefit Fund (Exhibit 8).  Adjusting for 2021 Residential consumption and the In-City CAP charge, this would increase Residential Bills by $11.15 per year per customer on top of the rate increase already proposed for the 93% of Residential customers who will pay for it (Exhibit 9).  This is tantamount to a hidden rate increase, but since it will be paid as a pass-through cost, it does not show as one.

But as stated in Point 1, many customers absorbing this CAP increase are, ironically, also low- or moderate-income.  Even though they are poor, they do not receive the discount.

By using an analysis that shows an astounding trend of new efficiency in newer Residential customers (Exhibit 10 and Exhibit 11), Austin Energy attempts to justify the need to create a much more regressive rate structure in order to collect adequate revenue. 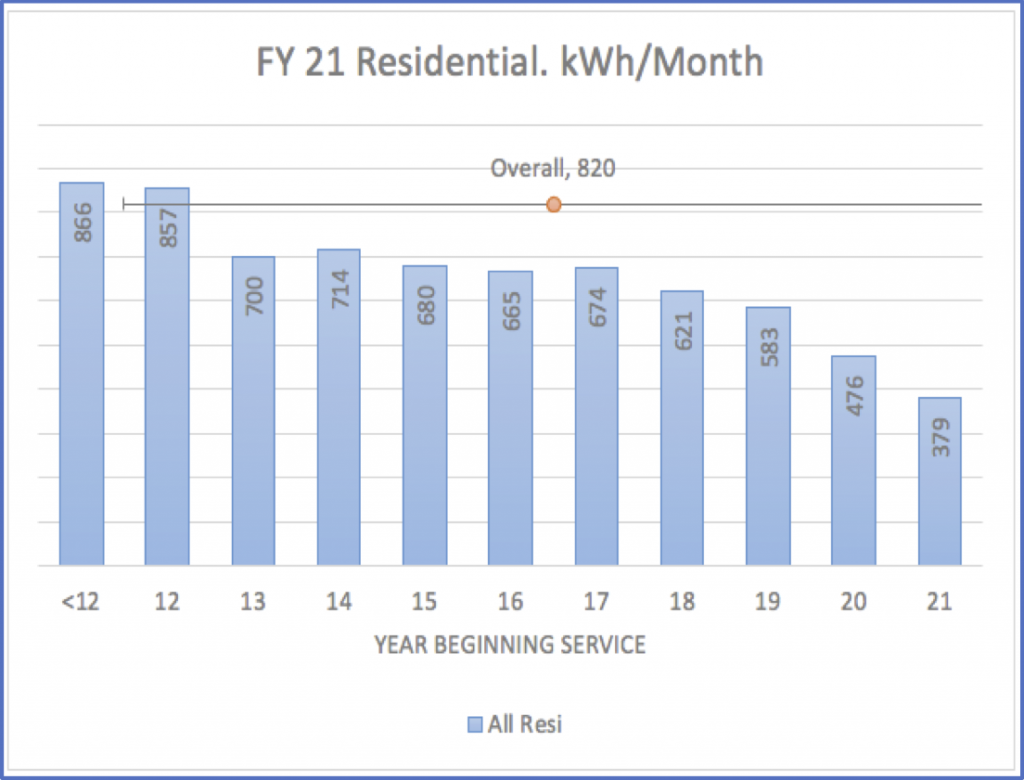 There are several problems with this analysis, however.

• The analysis does not account for customers who have their HVAC needs met with a central system, such as downtown condos and homes with shared geothermal loops. (Exhibit 10.)

• The study does not consider that customers in older dwellings will also become more efficient over time. While a new home has its appliances (e.g., HVAC, refrigerators) immediately installed to national appliance standards, older homes will install appliances with higher standards when their older machines are replaced.

• Austin Energy has not discussed how consumption in rental units in the study might be influenced by consumption through the customers enrolled in the Continuous Service Program (also known as the Multifamily Partners Program). (Exhibit 12.)

The City of Austin has encouraged a culture of energy conservation since the 1980s.  Between 1982 and 1997, a separate City department was in charge of programs related to energy efficiency retrofits, the energy building code, and the green builder program.  In 1997, these programs were merged into Austin Energy.

These programs, combined with progressive electric rates that discourage use, have resulted in the lowest Residential consumption of any major utility in ERCOT.  However, recent positions and actions by the utility question its commitment to energy efficiency.

According to the annual Energy Information Agency 861 report, in 2020, Austin Energy’s average consumption of 10,212 Kwh was 25% lower than the ERCOT average.  Only 1% of ERCOT’s 9.6 million Residential customers had lower average consumption than Austin. 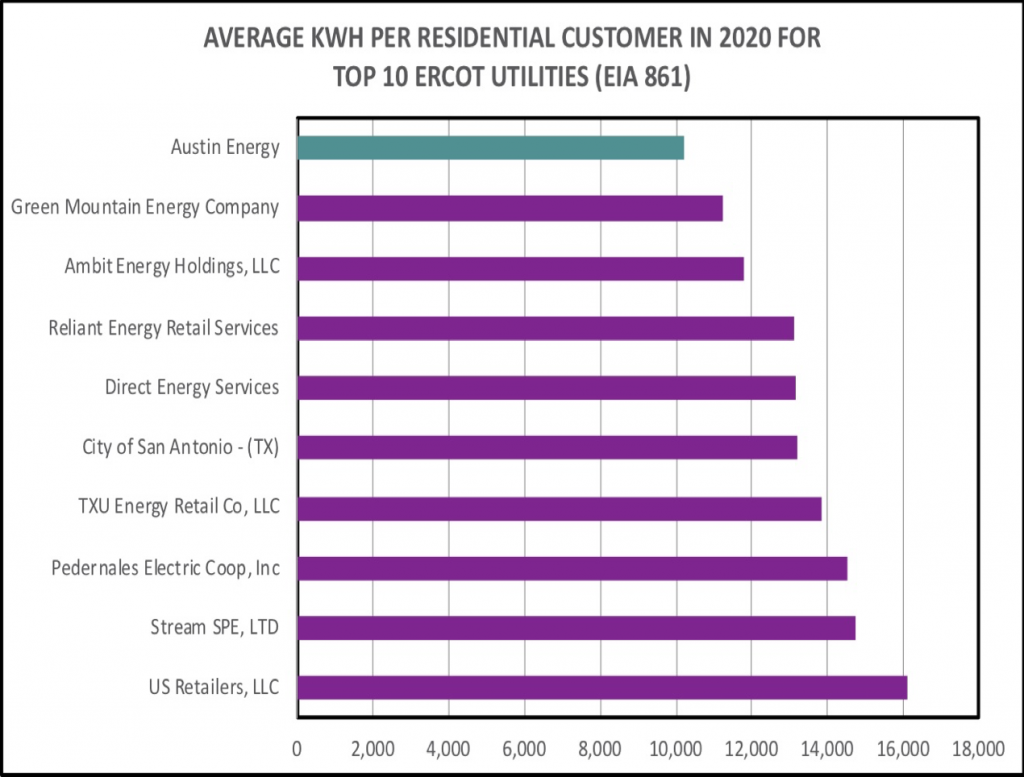 While Austin Energy has had some type of progressive Residential rate structure since 1981, it began its steeply progressive 5-tier system in 2013.  Since then, there has been a profound drop in consumption of 13%.  (This is not weather normalized.) 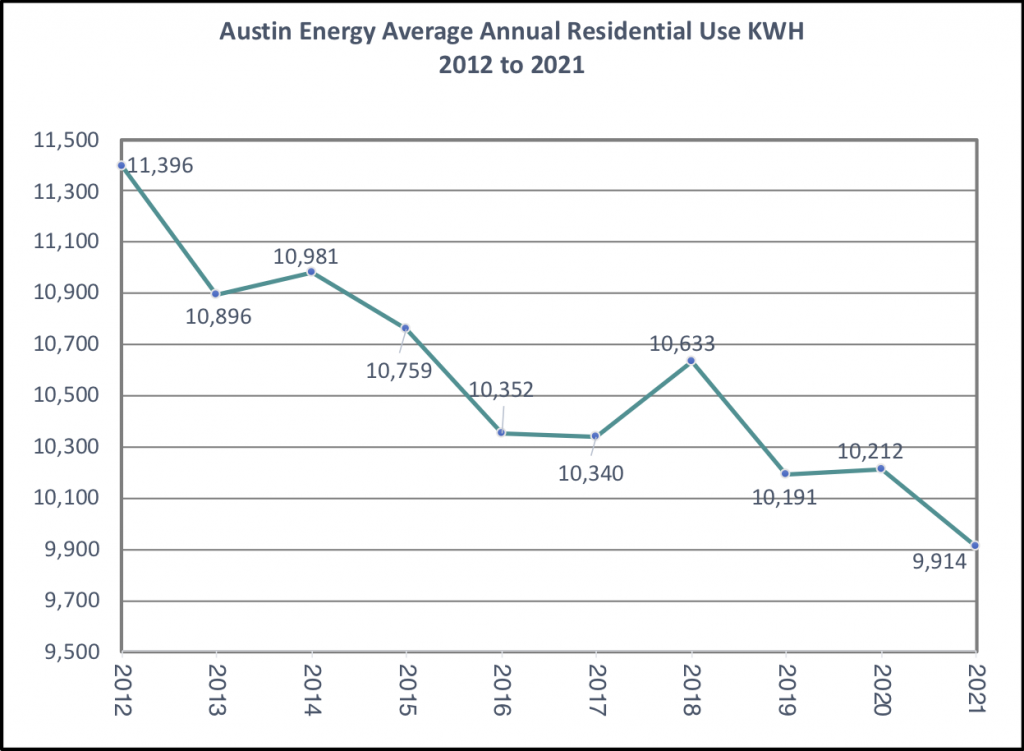 Price elasticity is an established principle of rate making.  Any number of national and international studies confirm its merits.  Below is one chart from a recent report by the Energy Information Administration.  Note that the longer elasticity continues, the more energy savings will accrue from it.  This is because instead of just short-term modified behavior, efficient appliances and structural energy retrofits are more likely to occur. 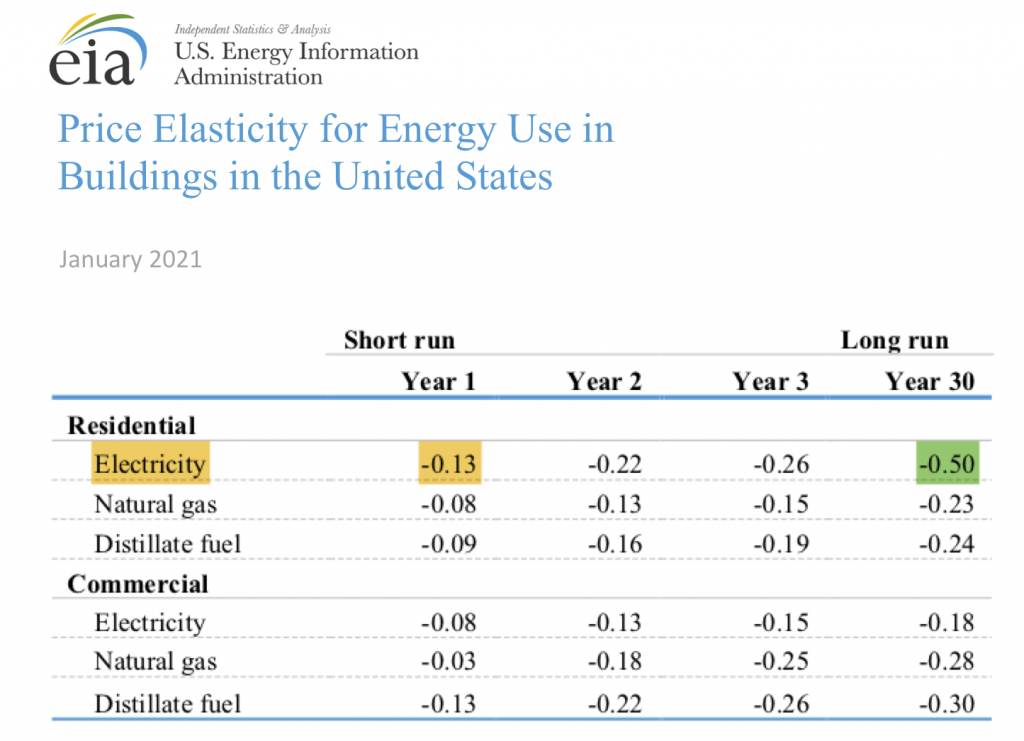 Austin Energy has disparaged the progressive rates as a “brutal price signal to focus on conservation” because it allegedly prevents it from collecting enough revenue. 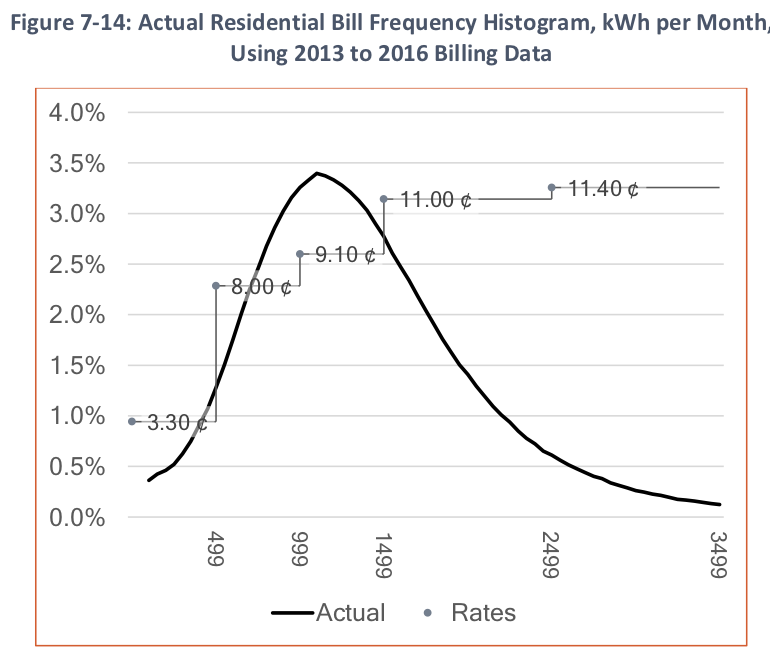 However, in response to a directed question to Mark Dombrowski on July 13, 2022, he admitted that this chart did not include monthly fees, fuel costs, regulatory charges, and the Community Benefits Fund.  Since these costs profoundly alter what customers really pay, they would alter the conclusions had the methodology been adjusted.

In 2014, the Austin City Council passed an ordinance mandating that Austin Energy collect 100% of its costs for serving new customers.  This ordinance actually led to a rate decrease in 2016.

However, Austin Energy is partially justifying its rate increase because of increased expenditures for growth to the system.

If this is correct, then it shows a double standard between Austin’s water and electric utilities.

Attached is an excerpt from the “Water and Wastewater Impact Fee Reports” from the Austin Water Utility for 2018 (Exhibit 15).  (Note that “Exhibit A” appears in the evidence, and is not part of the numerical sequencing of this presentation.)

The study shows pumps stations, transmission mains, reservoirs, water treatment plants, and other infrastructure common to all water customers is part of the capital recovery fees.  Capital Recovery Fees are similar in many respects to CIAC in electric systems.

It has yet to be determined if the biomass plant will be included in base rates.

If it is included, there are 2 potential points of savings this intervener has identified.

The first is a longer amortization period.  The Nacogdoches power plant will be amortized over a 20-year life, including 10.25 more years with Austin Energy as its owner.  Power plants are typically designed for 30 years.  Extending the amortization by another 5 years (to a total 25-year life) will save about $11.8 million a year.  This assumes current balance and current 1.52% interest (inferred from evidence).  This does not consider times coverage.  (Exhibit 16.)

The second is to reduce taxes paid to local governments.  Austin Energy is a tax-exempt entity.

Austin Energy has experienced chronic and long-standing problems with its discount program for the poor since it was implemented in 2013.  Some ratepayer money is being misspent by awarding discounts to the wrong customers through its profoundly flawed automatic enrollment program.  This has repeatedly led to documented and embarrassing revelations of Austin Energy customers with documented high-property wealth being on the CAP roles.

Austin utilities spend about $2.8 million a year administering this program.  Austin Energy’s share of this is about $1.3 million, and it is paid for in base rates (Exhibit 18 and Exhibit 18 Worksheets 1 and 2).

Austin Energy has hidden information that can assist in documenting these continued problems.  It is my understanding that at the Public Utility Commission, “protective orders” can be made to gather confidential information that will not be made public.  However, this utility is intentionally constricting information, possibly because it continues to be embarrassing to them.

By my own admission, this is not the most expensive item in this rate case.

Yet there are two reasons why I continue working on this issue.  First, this represents money being taken away from the poor.

There could be thousands of CAP customers above 200% of poverty that are receiving discounts.

The other reason is that I expect more from public servants than acting like bureaucrats.  After 8 years, Austin Energy will not correct the problems in this program.  The rate case might provide some latitude in getting corrections.  Austin Energy employees who are misapplying funds are hiding behind their civil service protections to continue to administer this program in a clumsy, inefficient manner.  As an activist, I refuse to validate this kind of behavior.

The Judge can assist in this endeavor if he will grant the Special Motion I made for this on July 11.

If I can send this information to a data firm that collects information on income and household size, it will be an easy and inexpensive way to learn if CAP is sending money to people with higher income levels.  This information will not be made public, only the summaries.

Austin Energy could have done this on its own, but remains remarkably disinterested.

This concludes my testimony.

I appreciate your attention.